What is Gynecomastia in Males?

The term “Gynecomastia” has been derived from two Greek words, Gynae meaning ‘woman’ and mastos means ‘breast’. It generally refers to a benign proliferation of male breast tissue, and is defined by the presence of greater than 0.5cm of palpable, firm gland beneath the areola (the pigmented skin around the nipple), in addition to ductal breast tissue. Gynecomastia is relatively common, with the greatest incidence during infancy, puberty or old age. 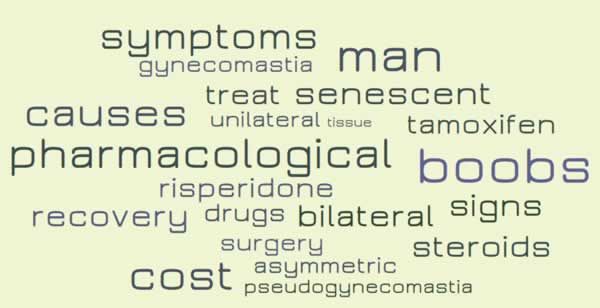 Gynecomastia has been traditionally classified into four grades or levels based on the largest diameter of the breast tissue measured by breast calipers. Grade 1, or mild gynecomastia, has a diameter of ≤2 cm and is characterized by one or more freely movable subareolar nodules, without skin sag. Grade 2, or moderate gynecomastia, has a diameter ranging from 2-4cm with the breast nodules extending beyond the areolar perimeter, without skin excess.

Grade 3 has a diameter ranging from 4-6cm, and grade 4 has a diameter of >6cm. Both these grades are classified as severe gynecomastia, and are characterized by the presence of excess skin resulting in breast sag.

Gynecomastia, or “man boobs”, has seven different types based on the morphology of the breasts. Type 1 is characterized by a puffy nipple, with the breast tissue being the size of a large egg and extending outside the margins of the areola, resulting in a cone shaped appearance of the nipple and areola.

Type 2 gynecomastia is the most common type encountered in the clinics, and is defined by the presence of excess breast volume, sometimes the size of a tennis ball, that involves the lower chest with a chest angle less than 45°.

Asymmetric gynecomastia occurs when both breasts are unequal in size. The breasts may be asymmetric with regards to the size, shape, and location of the enlarged area. The areolas may also differ in size, shape, protrusion and diameter. As is the case with other forms of gynecomastia, breast asymmetry may occur both unilaterally and bilaterally.

The diagnosis of gynecomastia involves strict application of predefined criteria. Unfortunately, the stigma associated with this condition has led to the widespread belief that all males with unusually large chests have man boobs.

Pseudogynecomastia, or false gynecomastia, refers to buildup of excess fat beneath the nipples, with no change in the size of glandular breast tissue, giving the false impression of man boobs. A clear distinction between false and true gynecomastia is necessary as the management options for both differ markedly.

Although a definite diagnosis of gynecomastia vs. fat can only be made by a certified physician, there are a few points that may help distinguish fat from actual glands. Fat deposits are soft to the touch and have loose skinfolds, whereas actual breasts are firmer and look more like a woman’s breast.

The presence of firm or fibrous tissue can be judged by lying on the back, placing one thumb on either side of the nipple and slowly bring the thumbs together while applying inward pressure to the chest.

For the majority of cases, a physical exam may suffice in diagnosing gynecomastia. A careful medical history is also essential, including but not limited to medication and drug use. A mammogram may also be ordered, especially if cancer is suspected.

Three mammographic patterns have been described for gynecomastia: nodular, dendritic, and diffuse. Nodular gynecomastia assumes the appearance of a fan-shaped radiodense mass radiating from the nipple. This mass may be more prominent in the upper, outer quadrant. The nodular pattern is usually observed in florid gynecomastia, thought to be the early phase of gynecomastia and is seen in patients with gynecomastia for less than one year.

Dendritic gynecomastia is observed in patients with greater than one year history of gynecomastia, also referred to as the quiescent or late phase. This pattern is characterized by fibrotic radiodensity beneath the areola, with linear projections radiating into the surrounding tissue toward the upper-outer quadrant.

Diffuse gynecomastia is observed in patients with excessive levels of estrogen, especially those receiving exogenous estrogen. This pattern features both nodular and dendritic subareolar densities.

Signs and Symptoms of Gynecomastia

Although the classic sign of gynecomastia is breast enlargement with firm glandular tissue under the areola, certain symptoms may serve as a warning before the appearance of a lump. The first symptoms of gynecomastia include increased sensitivity, itchiness and puffiness of the breasts, with increased diameter of the areola and/or protrusion of the nipples.

The breasts may also develop tenderness later in the course of the condition. Milky or bloody discharge, although rare, may signal the presence of a tumor in the breast or the pituitary gland, and therefore warrants a prompt visit to the physician.

What do gynecomastia symptoms feel like? Most people may not even know they have gynecomastia, as the condition is mostly asymptomatic. For others, it may prove to be a source of great anxiety due to the stigma associated with being labelled as having man boobs.

Although the etiology of gynecomastia remains uncertain, it is thought to be due to an altered ratio of estrogens to androgens, caused either by elevated estrogen production, decreased androgen production, or a combination of both.

Drugs that Cause Gynecomastia

Pharmacological gynecomastia results from the use of medications, and is responsible for as many as a quarter of all cases. Drugs that cause gynecomastia include the antifungal agent ketoconazole, anti-peptic ulcer drugs such as cimetidine and omeprazole, hormones such as human growth hormone, human chorionic gonadotropin, hormone analogs such as gonadotropin-releasing hormone analogs and spironolactone

Drugs used in the treatment of benign prostatic hyperplasia and prostate cancer have also been implicated in the development of gynecomastia. These include 5-alpha-reductase inhibitors such as finasteride and dutasteride, antiandrogens such as bicalutamide, flutamide and estrogen therapy.

Other drugs such as risperidone, calcium channel blockers (e.g. verapamil, amlodipine), anabolic steroids, opioids, alkylating agents and alcohol are also associated with gynecomastia development. Herbal products and natural supplements such as lavender oil and Tribulus terrestris have also been implicated.

The question of how to treat gynecomastia depends on a variety of factors, the most important of which are etiology and severity. Physiological gynecomastia usually regresses on its own and often does not require any management other than lifestyle changes and exercise. Pharmacological gynecomastia can be controlled by discontinuation of the culprit drug.

If conservative management fails, for example in severe gynecomastia, medical or surgical intervention often becomes necessary. Physiological gynecomastia in children and adolescents can be treated by aromatase inhibitors such as testolactone. Tamoxifen and raloxifene, members of selective estrogen receptor modulators, are beneficial, especially in painful gynecomastia in adults, but have not been approved by FDA for treatment of man boobs.

Surgery is often used as the last option, especially in chronic severe gynecomastia resistant to medical therapy. Mastectomy approach depends on the type of gynecomastia (as outlined above) and includes subcutaneous, liposuction-assisted, laser-assisted and laser-lipolysis.

The average cost of gynecomastia surgery hovers just over the $3000 mark, but may vary depending on the expertise of the surgeon and the complexity of the procedures involved.

The surgery may be complicated by infection, or may have cosmetic implications such as asymmetry or scar formation. These, coupled with gynecomastia surgery cost, may discourage potential candidates from opting for surgery as a management option. These individuals may benefit from alternative modalities, and may consider using gynecomastia compression shirt.

Does gynecomastia go away after surgery? The answer to this question depends on the experience of the surgeon and the amount of care taken by the person with the condition. Man boobs surgery recovery may take around two to three weeks, depending on the type of surgical procedure, and the nutritional status of the person. Thus, it is absolutely essential to maintain a balanced diet to ensure speedy recovery after gynecomastia surgery.

Gynecomastia: The Etiology of Man Boobs

How to Lose Man Boobs by Exercise