Have you noticed a visible increase in the size of your chest recently? Well, this might be the first exhibiting sign of a common male disorder which is referred to as pseudogynecomastia. Countless of men around the world suffer from this disorder and most of them are not even aware that they have it. However, there is a tight line between pseudogynecomastia and another disorder known as gynecomastia. This is why it is highly recommended that you understand the differences between both because the pseudogynecomastia treatment is rather different.

As far as the literal translation goes, this long word is combined of two shorter ones – pseudo and gynecomastia. The former is literally translated as false while the latter is the name of a medical disorder commonly seen in men. So basically, pseudogynecomastia is also referred to as false gynecomastia. The most evident symptoms of pseudogynecomastia are the puffy nipples. This is due to the fact that the disorder consists of building up fat behind as well as under and around the nipples. 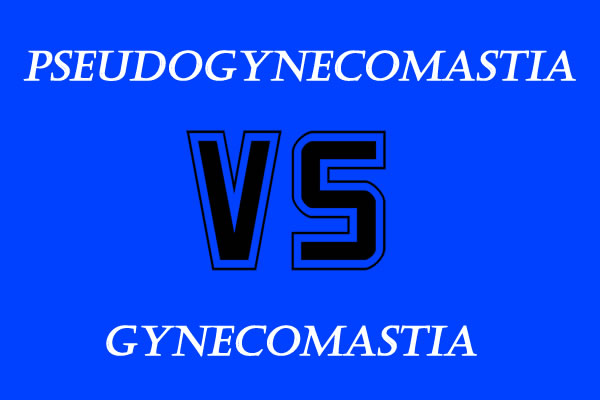 How do We Tell If It’s Gynecomastia or Pseudogynecomastia?

The most important difference that you would have to be informed about lies within the reason for the disorder in the first place. In the case of gynecomastia, we have an excessive growth of breast tissue which may lead to feminization of the male breast. However, pseudogynecomastia is the result of a built up fat, which is essentially an entirely different thing. No matter what the occasion is, a pseudogynecomastia test is mandatory in order to determine the right disorder. So basically it is either going to be chest fat or gynecomastia.

In order to come up with a diagnosis, the doctors would examine your body for the pseudogynecomastia symptoms. To do so, you will be required to lie flat on your back and you will have to put both hands behind your head. If the doctor feels a firm concentration of tissue around the nipple area in the form of a disk, the patient is going to be diagnosed with gynecomastia. However, if no such ring is formed, the diagnosis would be pseudogynecomastia because the fat is rather loose and not firm at all.

Nevertheless, the technology is advanced enough to provide doctors with more modern and incredibly complex devices that would enable them to properly determine the correct disorder. By using ultrasound radiology devices, medical officers would be capable to determine whether or not you have one of the two disorders. This is due to the fact that the machine is going to find out whether it is fat that has been building up in your chest area or it is breast tissue.

It is important to comprehend that there is a variety of possible causes that might cause this particular disorder. However, we are going to focus on some of them as they are most common. After all, more than 30% of men around the globe have such a disorder and the causes are rather numerous.

It’s is almost certain that if you are using those supplements, you are likely to end up with pseudogynecomastia. This is due to the fact that while you are using them your organism is going to produce an excessive amount of testosterone which would help you transform the fat into muscles. You will surely exhibit promising symptoms and your muscles are going to start to grow. However, once you are done using them it’s all downhill from there. The organism is going to stop producing the testosterone and the muscles you’ve built won’t hold up. They would eventually turn to fat which is the main symptom of pseudogynecomastia.

You might think that estrogen is normally found in women’s organisms and you would be partially right. Estrogen is also found in male bodies but in severely reduced quantities. As you know, estrogen is the hormone which causes breast growth amongst women and it has the same effect on men. This means that if the levels of estrogen rise, your breast are going to start to grow.

The most common reason for excessive quantities of estrogen is once again related to steroids. While the organism is producing a lot of testosterone as a result of the usage, it is also going to compensate it with estrogen. However, because your testosterone levels are so high, the estrogen won’t have any effect. This all ends when you stop using them. You will have elevated estrogen levels which will surely result in enlarged breast.

Basically anything that is causing your organism to stop developing in the right norms is potential pseudogynecomastia threat. Drugs are definitely preventing your tissue to develop as it should which is likely to turn into this particular disorder.

This is the most feared cause of them all. Cancer cells are known to destroy muscle tissue and therefore you will observe an increase of fat around the areas of your nipples, if you have breast cancer. This is the most dangerous possibility and it is incredibly important to rule it out while you are subjecting yourself to tests.

One of the solutions, if the chemotherapy fails is male breast removal.

There are quite a lot of different things that could be undertaken to provide proper treatment for this particular disorder. It’s important to know that there isn’t a uniform cure of this disorder and there are tons of viable methods to handle it.

The first thing that you should consider is a proper workout plan. It is advisable that you hire an instructor and let him know about your disorder. Male chest fat is generally not something that is hard to burn through because the chest is one of the largest muscles and there are a lot of exercises for it. However, the key is to target fat burning and not muscle burning. There is a variety of bodybuilding exercises that would enable you to get this excessive layer of fat removed.

Once again, it is highly recommended that you contact a nutritionist or a doctor. He would be able to compile a diet with the exact foods that you can eat and also the ones that you should avoid. The reason for which you would want to visit a professional is because this could be strictly individual and it is advisable that you get tested before it. If you are exhibiting the signs of pseudogynecomastia this should be one of the first things to consider. It is also advisable to combine working out with your diet plan for faster results.

If you are looking for an easy solution on how to get rid of pseudogynecomastia, pills are your go-to option. They require the least effort and they will get the job done. However, it’s important to purchase pills which are specifically intended for treatment of pseudogynecomastia and not for gynecomastia. 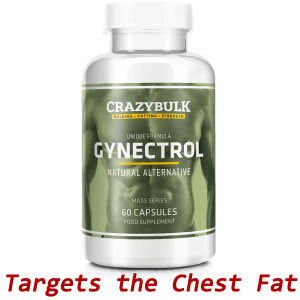 Gynectrol is likely to be the most recommended treatment for getting rid of pseudogynecomastia. It is specifically developed in order to burn excessive chest fat and it comes with a variety of benefits such as:

Once again, it is advisable that you combine this with a proper workout plan if you want faster and more impressive results. This solution in particular is developed by the organization known as CrazyBulk which is one of the leaders in the supplement industry.

There are a variety of different reasons which may push you towards a more aggressive method of handling this problem. Even though it will cost you a considerable amount of money, a surgery is always a viable option. For instance, not all people are capable of trying out weight loss programs because of health issues. They may have elevated heart rate which is one of the causes for them to avoid heavy lifting or any kind of exercise routines. Also, pills for pseudogynecomastia treatments may include some substances that the person is allergic to or has a disorder that doesn’t allow him to take them. These are the most common reasons for performing a surgery of this kind.

The difference between gynecomastia and pseudogynecomastia and the proper diagnosis appears once again. In this case, it is of essential importance. This is due to the fact that the surgical procedure for gynecomastia is an excision, while the one for your pseudogynecomastia is a simple liposuction. Basically the surgeon is going to access the chest fat and suck it out of your breast which will almost immediately result with the desired effects. It is a plastic surgery and there are almost no threats surrounding it at all. However, the cost of such a procedure may vary, but they are generally somewhere around the $2,000 mark.

These are also commonly referred to as shirts for gynecomastia and they are another possible option for you to deal with the problem. However, this is only temporarily and it is not a permanent solution as they won’t get rid of the excessive fat underneath your nipple area. They would only suppress it for the time during which you are wearing the vest.

Even though the name suggests that the shirts are intended for gynecomastia, because the exhibiting symptoms and the external signs are rather similar, the shirts are also viable and usable for pseudogynecomastia.

If you are having an important event which is coming shortly and you don’t have enough time to burn through that fat with exercising or with the pills and you can’t afford the expensive surgical procedure, the compression vest might seem like a logical and cheap solution.

Another perk of wearing such a vest is the fact that it would enable you to understand how it feels like if you didn’t have the disorder, which may be the push you need to get a surgery done or to start working out. It’s a simple piece of clothing which would suppress your chest by being incredibly tight. It’s worn underneath a sweater or a shirt and it won’t be seen by other people. It may cause a slight discomfort at first but you will quickly get used to it.

The most important thing when facing a disorder of this kind is to take precautions. It is always recommended that you avoid pills or surgery and handle the matter naturally by exercising. However, if you face problems doing so, be sure to turn to any of the other possible solutions. Pseudogynecomastia might not be a severe disorder but if left unattended it might lead to other more dangerous complications.

What is the Medical Treatment for Gynecomastia?

Gynecomastia: The Pathophysiology and Clinical Profile of Man Boobs

Gynecomastia: The Etiology of Man Boobs